Originally appeared in Yeshiva University's Mitokh ha'Ohel on the haftarot in November 2011.

In general, the topic of Yemot Ha-Mashiach is shrouded in mystery, so much so that Rambam famously cautioned against excessive messianic speculation. This is particularly true with respect to Mashiach ben Yosef, whose very existence is questionable. No pesukim clearly refer to Mashiach ben Yosef, rendering his legacy even more difficult to decipher. Furthermore, the narrative of Mashiach ben Yosef appears in more familiar rabbinic sources as well as eschatological chronicles such as Sefer Zerubavel and Midrash Vayosha. It is sometimes difficult to know how much weight to assign some of these more obscure texts. Finally, it is difficult to know whether to take the midrashim surrounding Mashiach ben Yosef literally or figuratively, particularly the sources that offer an incredibly detailed and fantastic account of the Messianic Era. For these reasons, our purpose in this article is not to craft a comprehensive portrait of Mashiach ben Yosef, nor to fully analyze his significance from a historical or theological standpoint. What we will aim to do, however, is conduct a careful study of some of the classical sources on this mysterious figure, which will enable us to draw some meaningful conclusions regarding the legacy of this enigmatic personality.

The haftarah for Parashat Vayigash, taken from Yechezkel chapter 37, offers an uplifting vision of the unity that will be restored during the Messianic Era, a healing of the  bitter divisions between Ephraim’s Northern Kingdom, centered in Samaria, and Yehudah’s monarchy, located in Yerushalayim. Dramatically portraying the peace that will reign at the End of Days, Hashem commands Yechezkel to take two staffs, one representing Malkhut Yehudah and the other Malkhut Yisrael, and miraculously fuse them into one. The two warring monarchies similarly will be reunited during messianic times.

At first glance the pesukim do not differentiate between the two staffs. Malbim (37:19), however, points out that in describing the merging of the staffs, Yechezkel first mentions the staff of Yosef and then the staff of Yehudah (ibid.). Furthermore, it sounds as if the staff of Yehudah is being grafted onto that of Malkhut Yisrael. What are we to make of these textual cues?

This tradition, however, raises a number of thorny questions. As noted above, no explicit mention is made of Mashiach ben Yosef in Tanakh. Where does he come from? The very need for a second messianic figure seems odd. Is Mashiach ben David not capable of redeeming the people on his own? And why was the tribe of Yosef chosen as the progenitor of this second messianic personality?

To better appreciate our subject, I would propose that we paint the story of Mashiach ben Yosef and Mashiach ben David on a broader canvas by reviewing the story of the relationship between the tribes of Yehudah and Yosef. As a brief overview will amply demonstrate, that narrative is one of tense rivalry and internecine conflict.

The rivalry between Yosef and Yehudah begins even before the two brothers are born: Rachel and Leah vie aggressively for Yaakov’s favor. Rachel is the beloved; if not for Lavan’s trickery she would have married Yaakov first. Yaakov’s love for Rachel arouses Leah’s jealousy, who names her second son Shimon “ki senu’ah anokhi” - “for I am despised.” On the other hand, Leah bears six of the twelve tribes, allowing her to claim the mantle of family Matriarch.

With the maturation of the shevatim, we witness the sequel to Leah and Rachel’s competition. Who will emerge as leader: a child of Leah or Rachel? And once Reuven, Shimon, and Levi are eliminated as possible candidates, Yehudah and Yosef emerge as the only viable contenders for the throne. Yosef dreams that his family will bow before him, and his father, at least at first, endorses his ben zekunim. Yosef ultimately rises to the position of viceroy of Egypt, apparently leading to the fulfillment of his dreams, although he never rules directly over his family. Yaakov Avinu blesses Yosef, “tiheyenah le-rosh Yosef u-lekadkod nezir echav” - “Yosef, you shall lead, and the brow of the elect of his brothers” (Bereishit 49:26). He also inherits the firstborn’s double portion, as both Ephraim and Menashe earn a share in Eretz Yisrael.

Yehudah, on the other hand, demonstrates his leadership ability on numerous occasions. He recommends selling Yosef to the merchants, and he ultimately acknowledges his sin in the episode of Tamar. It has been suggested that the incident of Yehudah and Tamar is specifically placed immediately following the sale of Yosef to hint that the latter section of Sefer Bereishit is really about the struggle for leadership of the nascent nation.

Intriguingly, at the opening of Parashat Vayigash, Yehudah approaches Yosef to offer himself in exchange for Binyamin, Yosef’s younger brother. Yehudah’s act of kindness toward Yosef and Binyamin perhaps foreshadows his revival of Mashiach ben Yosef as portrayed by R. Saadiah Gaon.

Ultimately, Yehudah clearly emerges from Sefer Bereishit with the upper hand: “lo yasur shevet mi-Yehudah” - “the staff shall not pass from Yehudah” (Bereishit 49:10). The brothers may have prostrated once before Yosef, but they will bow far more often to Yehudah (see ibid., 49:8).

Later stories in Tanakh weave new strands into this narrative. Yehoshua is descended from the tribe of Ephraim; although technically not a monarch, his position as unrivaled leader and heir to Moshe perhaps indicates that the pendulum has swung back in Yosef’s direction.

That movement continues with Shaul’s ascent to the throne. While the sinfulness of Kelal Yisrael’s request for a ruler (see Shmuel Bet, ch. 8) casts a long shadow over Shaul’s appointment, it is nevertheless significant that he descends from the tribe of Binyamin. David, on the other hand, is of course a scion of Shevet Yehudah. This perspective shines a bright light on Shaul’s incessant attempts to assassinate David: Shaul’s irrational hatred stems not only from a personal conflict but from a rivalry that has simmered for generations. A similar point can be made regarding the bond between David and Yehonatan: Their relationship is all the more remarkable in light of their families’ bitter rivalry.

We now arrive at the First Temple period and the division of the monarchies. Yerovam ben Nevat – descended from Ephraim – secedes from Malkhut Yehudah and inaugurates the Northern Kingdom. The two kingdoms remain rivals until the exile of the Northern Kingdom, and at times the tension devolves into warfare (e.g., Melakhim Aleph 15:6, 16, 32; 16:12-13; Melakhim Bet, ch. 9).

Reflecting broadly on the development of the relationship between the two tribes, tensions seem to degenerate over the course of time: Leah may have been jealous of her sister, but we find no outright hostility between the wives. For the most part, much the same can be said of Yehudah and Yosef. With respect to Shaul and David, as well as the two kingdoms, however, violence is the norm.

In light of this history we can return to the narrative in Yechezkel with a fresh perspective. The staffs represent not only the reunification of two warring kingdoms but of two rivals whose relationship has been fraught with tension throughout.

Furthermore, our thesis takes on even greater significance in light of our previous observation that over the course of history, the relationship between the tribes had descended in a downward spiral. The reunion between the two messianic figures dramatically reverses the deteriorating relationship, miraculously restoring not only civility but even harmony.

We can now account for the anomaly that Mashiach ben Yosef is variously named “ben Yosef,” “ben Ephraim,” and “ben Rachel.” Since the conflict originates with Rachel and Leah, these various surnames for Mashiach ben Yosef all accurately capture his lineage and significance.

We can now more fully appreciate another dimension of the Mashiach ben Yosef narratives. Despite Yosef’s previous attempts to usurp the mantle of leadership (as evident, for example, in his dreams and the Northern Kingdom’s attempts to defeat the Southern Kingdom), Mashiach ben Yosef accepts his assigned role as supporting cast to Mashiach ben David. This is implicit in the aforementioned verse in Yeshayahu: The pasuk states that Ephraim will no longer be jealous of Yehuda, and Yehuda will cease to be an enemy of Ephraim. The pasuk indicates that it is Yosef – not Yehudah – who will overcome his jealousy and accept Yehudah as his equal, if not superior. Yosef’s willingness to cede the spotlight to Mashiach ben David further reinforces Mashiach ben Yosef’s role as a harbinger of peace.

The symbolic understanding of Mashiach ben Yosef enables us to account for a number of the anomalies we noted at the outset. According to Rashi (Sukkah 52b), the two meshichim will collaborate to build the Third Temple, which will usher in the Messianic Era. This joint project concretizes their newfound partnership - what greater symbol of unity can there be than the Beit Ha-Mikdash, the locus of the Jewish people’s collective worship? Moreover, our thesis points to a new interpretation of Mashiach ben Yosef’s demise: perhaps more important than that event is Mashiach ben David’s response. First he retakes Yerushalayim, essentially completing the task begun by Mashiach ben Yosef. Even more significant, Mashiach ben David’s first act of techiyat ha-meitim is performed upon Mashiach ben Yosef. With this act of kindness, the reconciliation is complete.

The legacy of Mashiach ben Yosef, then, as so vividly portrayed in Yechezkel chapter 37, is one of historic reconciliation and reunification between two warring tribes and families, among whom it once seemed that internecine strife might never subside. May our generation merit to personally witness the arrival of both messianic personalities, as well as the peaceful era they so magnificently personify.

In the days since Rav Druckman’s passing, there has been intense debate as to whether remembrances in the immediate aftermath of his death should mention his mishandling of the abuse charges against Zev Kopilevich and his championing and attempts to rehabilitate Moti Elon. Some argue that we do not

Modern Orthodoxy And Morality: In Response To Ben ShapiroThis is a false choice. We must be forthright and confident in articulating our values, but we should also avoid being needlessly antagonistic, intellectually dishonest, or uncharitable in our interprThe Jewish PressRabbi Dr. Tzvi Sinensky In his recent op-ed in The Jewish 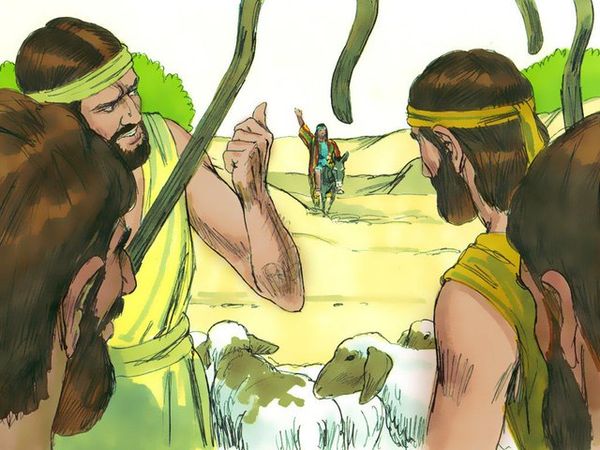 In using the word na’ar to describe the ill reports Yosef delivered to his father, does the Torah depict Yosef as the first biblical teen? If we pose the problem literally, the answer is obviously yes. Yosef was, after all, 17 years old. But our question runs deeper: did